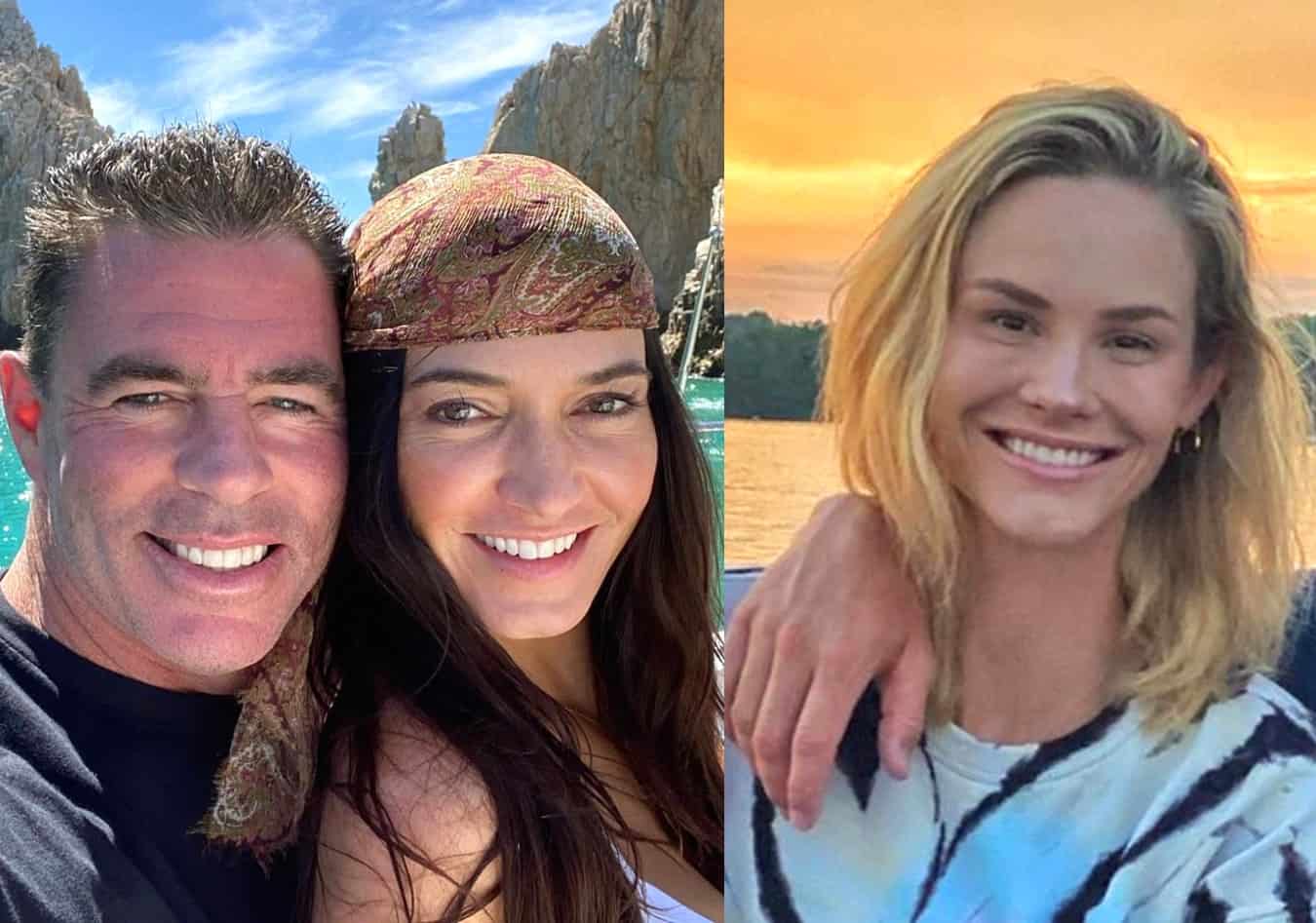 Jim Edmonds and Kortnie O’Connor are telling all about their ongoing drama with Meghan King.

As the Real Housewives of Orange County alum continues to bash the baseball great, most recently accusing him of “intimidation” and using their children, six-year-old daughter Aspen and four-year-old twin sons Hayes and Hart, to hurt her, and seemingly calling out Kortnie for sharing pics of the kids against her wishes, Jim and Kortnie fired back at her many alleged lies.

“I think that the only thing I could hang my hat on is every single thing that comes out of her mouth is a lie,” Jim began on the January 18 episode of the Hollywood Raw podcast with Dax Holt and Adam Glyn, noting that Meghan had lied about him and Kortnie getting married on her birthday.

“It was on the 25th by the way, not my ex’s birthday … I don’t even know where that came from,” he admitted.

“I was actually friends with him first,” Kortnie clarified. “Mutual friends of us introduced us at Stage Coach and we were all there together and as a big group …  She says that we were best friends or something and I like [stole] her husband and it’s like so far from the truth because I never even really knew her.”

Meghan also alleged at the time that Jim had an inappropriate relationship with their nanny of three years, which Jim denies, saying he was more of a father figure to the woman — at Meghan’s request.

According to Jim, Meghan has since admitted she made up the face rumor because “she was mad.”

“I was like, ‘Well that’s unfortunate because that’s just ruined her life’ … She went after our nanny Carly so hard that she lost everything, all self-esteem, everything, had to move outta the city, start over. And it was awful,” Jim revealed. “It was just like something you don’t do to a 23, 24-year-old child.”

In the years since their split, Jim claims he’s spent “close to a hundred,” likely referencing $100,000, on their divorce and ongoing custody battle.

“We had an ironclad prenup and she battled it for a year and a half,” he explained.

And when it comes to Kortnie, she feels Meghan’s antics could be the result of “mental illness.”

“I’m not a doctor. I can’t like label her that and [nor] do I want to … [But] I worry because it’s, why would you want yourself to constantly be going through all that turmoil and put yourself and your family through that? It’s like you’re humiliating your family and yourself and everybody around you.”

“They say we should have like a court evaluate her mental state and see [what] they come up with [and] if she wants to do that with him too, that’s fair,” she added.

Amid Meghan’s online attacks against Jim and Kortnie, Jim has also been dealt with a protection order (that was later dropped), which Kortnie said Meghan filed just before they wed — even though they’d been in contact.

“We’ve had the kids, we’ve seen her, she’s been at the house … She was asking to meet at the kids’ school the day before. I’m like, wait, if you’re in fear of your life, are you calling him saying, ‘Let’s ride together?'” Kortnie noted.

“The first thing on the thing was I that I kicked her dog, which was completely false. I threatened her dad. There were like five things on this list before it said that I, uh, that she was scared of me. And so it really never got filed,” Jim explained. “It was written by a child’s handwriting, basically. Like she filled the whole thing out herself and sent it into the police station.”

Although it has been over three years since Meghan and Jim’s marriage ended (just as Meghan’s former RHOC co-star Vicki Gunvalson predicted), Kortnie says their co-parenting relationship has gotten worse.

“In the beginning, they we were able to see each other and exchange the kids and stuff, but now it’s gotten to the point where we have a nanny doing it,” Kortnie revealed. “If I’m needed, I’ll step in. But she’s made it so that it’s hard for me even to co-parent with her because of the things she says about me. She’s embarrassed me, humiliated me. And it’s like, how many punches do you take to the face before you just say enough?”

According to Kortnie, even Jim’s older kids are impacted.

“They’re in junior high [and] they get the wrath … It’s not fair,” she said. “They’re getting teased at school and things at school. Like she doesn’t care at all about that.”

When Jim was asked what he’d tell Meghan if he had a chance, Jim had a stern message:

“You tell the lawyers, you tell your friends, you wanna co-parent. But then every time I turn around you’re bashing me on every talk show, on every TV show, on every, you know, even the simplest post that she makes is taking a jab at me … Move on. You’ve been married, you’ve dated four different guys that have actually lived in your house with you for a period of time. You have kids. I’m the dad. Like, when are you going to stop putting all this in writing so the kids don’t see it?”

One of the things Jim is most concerned about is Meghan’s public discussions about her sex life and partners.

“Girls, as we know, will be catty. [Aspen’s] going to be in a situation where someone’s gonna say, ‘Hey, your mom hooked up with uh, so-and-so and so and so and so and so in the same weekend.’ And, ‘Is she a lesbian? Is she straight? Is she bi? … How many guys has she slept with in a year?'” Jim expressed. “[I’m] just worried about my kids … I can’t imagine saying that stuff, not thinking, ‘Man, my kids are gonna hear this someday.'”

And speaking of his kids, Jim made it clear that Hart does not have cerebral palsy.

“It’s called [Periventricular Leukomalacia, or PVL] and it’s kind of like its own little thing. It’s kind of the very beginning stages. So it’s not technically cerebral palsy,” Jim confirmed of his son’s diagnosis. “There are just so many different versions … He has behavioral issues and stuff and he’s slower, but he’s catching up and, and you, if you interacted with him for a couple of hours, you wouldn’t even know.”

“Why put that stamp on him?” Jim wondered. “He was never diagnosed with [cerebral palsy] … Even my parents are like, ‘Does she not understand that this is gonna label this child for the rest of his life?’ … The thing that worries me the most is that, um, his friends are going to eventually know and see and read … The kids aren’t gonna understand and parents are gonna say, ‘Oh, watch out for him. He’s got issues.'”

As for whether or not he and Meghan will ever have peace, Jim said they will not “as long as she talks” as Kortnie was more hopeful.

“My hope is maybe when she’s happy we can all be happy,” she stated.