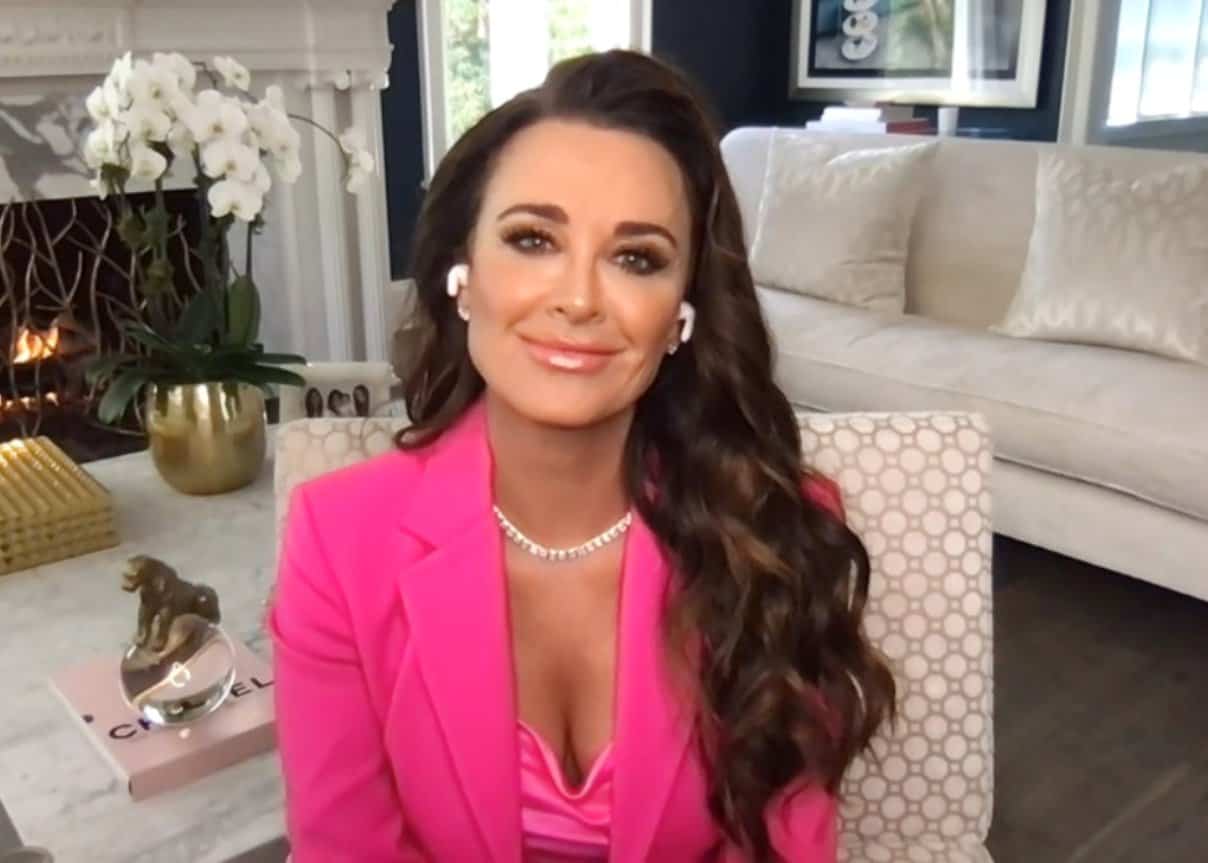 Kyle Richards recently opened up about the drama Erika Jayne will be facing throughout the remaining episodes of the 11th season of The Real Housewives of Beverly Hills.

As viewers prepare to watch the fallout from Erika’s divorce filing and legal drama, Kyle confirmed her support for her co-star before explaining why she agrees with her castmates’ assessment of Garcelle Beauvais‘ alleged inauthenticity. She also confirmed whose idea it really was to bring Kathy Hilton to the show.

“It honestly was waking up every day to headlines and just, kind of, watching her life…. I don’t know. For lack of a better word, crumbling before her eyes,” Kyle told Entertainment Tonight on June 9. “It was so much. It was happening while we were all together. So, there’s a lot of stuff coming out and it’s going to be a very challenging season for her.”

At the end of last year, amid production on RHOBH season 11, Erika filed for divorce after a decades-long marriage to Thomas. Then, in the months that followed, Erika was accused of helping him embezzle a multimillion-dollar settlement from orphans and widows of a plane crash in Indonesia. She was also accused of helping him hide his assets from his creditors.

Despite the allegations against her castmate, Kyle has stuck by Erika’s side.

“I don’t feel that Tom Girardi, one of the biggest attorneys in the world, was going home and sharing things happening at his firm with his wife,” she added. “That’s not the relationship they had.”

Because Kyle and Erika have grown so close over the past couple of years, they’ve spent tons of time together along with the rest of the Fox Force Five, which also consists of Lisa Rinna, Teddi Mellencamp, and Dorit Kemsley. The other members of the cast haven’t always appreciated that.

In addition to Sutton Stracke shading the group’s recent get-together in Los Angeles as immature, comments have been made about the way the group excluded her and Garcelle Beauvais from their post-reunion hangout last year.

“Garcelle made a comment, or Sutton [Stracke] — that we got together after the [season 10] reunion and they came to my house and they’re like, ‘It was kind of rude.’ I’m like, ‘Welcome to the Housewives!'” Kyle said. “There’s never been a reunion in all of these years where every single person gets together. It doesn’t happen.”

“Not everyone’s invited every time. There’s no trying to exclude. Garcelle and Sutton have dinner and we’re not invited. No big deal,” Kyle continued.

As RHOBH fans will recall, Kyle and Garcelle were in an extremely tense place after filming on the season 10 reunion due to their charity donation feud. Luckily, after sitting down for a discussion about why Garcelle felt so attacked by Kyle’s claims that she hadn’t paid (her donation ultimately arrived late) and other race issues, the women were able to get to a better place.

“We spoke through things and we really understood each other more after that,” Kyle revealed. “After we had our conversation, I felt bad about bringing up the charity at the reunion. We’re in a good place now and I’m just happy to move forward and laugh and have fun with her.”

That said, Kyle admitted that she understood where her co-stars, including Dorit and Lisa, were coming from when they suggested during a recent interview that Garcelle was the least authentic.

“I kind of understood that in a sense because, her first season, I thought she liked me,” Kyle explained. “We were getting along and having the best time, and then I would see interview bites or things that… Like when she said, ‘Oh, Kyle looked hideous tonight,’ and then she’d kind of giggle. That did feel inauthentic to me.”

In the trailer for RHOBH season 11, Kyle was seen reacting to 19-year-old Amelia Hamlin‘s relationship with Scott Disick, 38, by saying that the Keeping Up With the Kardashians cast member was “too damn old” for Lisa’s daughter. Months later, in an effort to remain authentic, Kyle stands by the comment.

“Listen, I’m a mother of four daughters, so I wouldn’t be happy with that situation,” she admitted. “I’m sure that she and Scott don’t love that I said that, but that’s how I feel.”

After being joined by sister Kathy Hilton, who took on a “friend” position in late 2020, for the new season, Kyle said that she was actually the one who suggested Kathy to producers.

“A lot of people thought, ‘Oh, Bravo’s pulling a fast one on Kyle.’ No, it was actually me suggesting it. I just said, ‘What about bringing my sister, Kathy, in?'” Kyle explained, adding that Bravo felt it would have been “very sister-heavy” if Kathy had joined while Kim Richards was still appearing.

“We’re all in a good place right now, thank God, and I would love to see Kim come back,” Kyle continued. “The fans really, really want to see the three sisters together. I’m hearing that over and over and over again. So, it would be really fun to have Kim be a part of it and Kathy at the same time, just to feel what that would feel like, to have all of us together.”

Also during the interview, Kyle spoke about her “eye-opening” experience on Real Housewives: All-Stars, which began filming in Turks and Caicos in April.

“It was unbelievably exhausting. I’m not even kidding you, we don’t shoot like that on our show and the other shows don’t either, but I would wake up and a light over my head, a production light, would go on at 7:00 a.m. It was total chaos and literally zero downtime at all.”